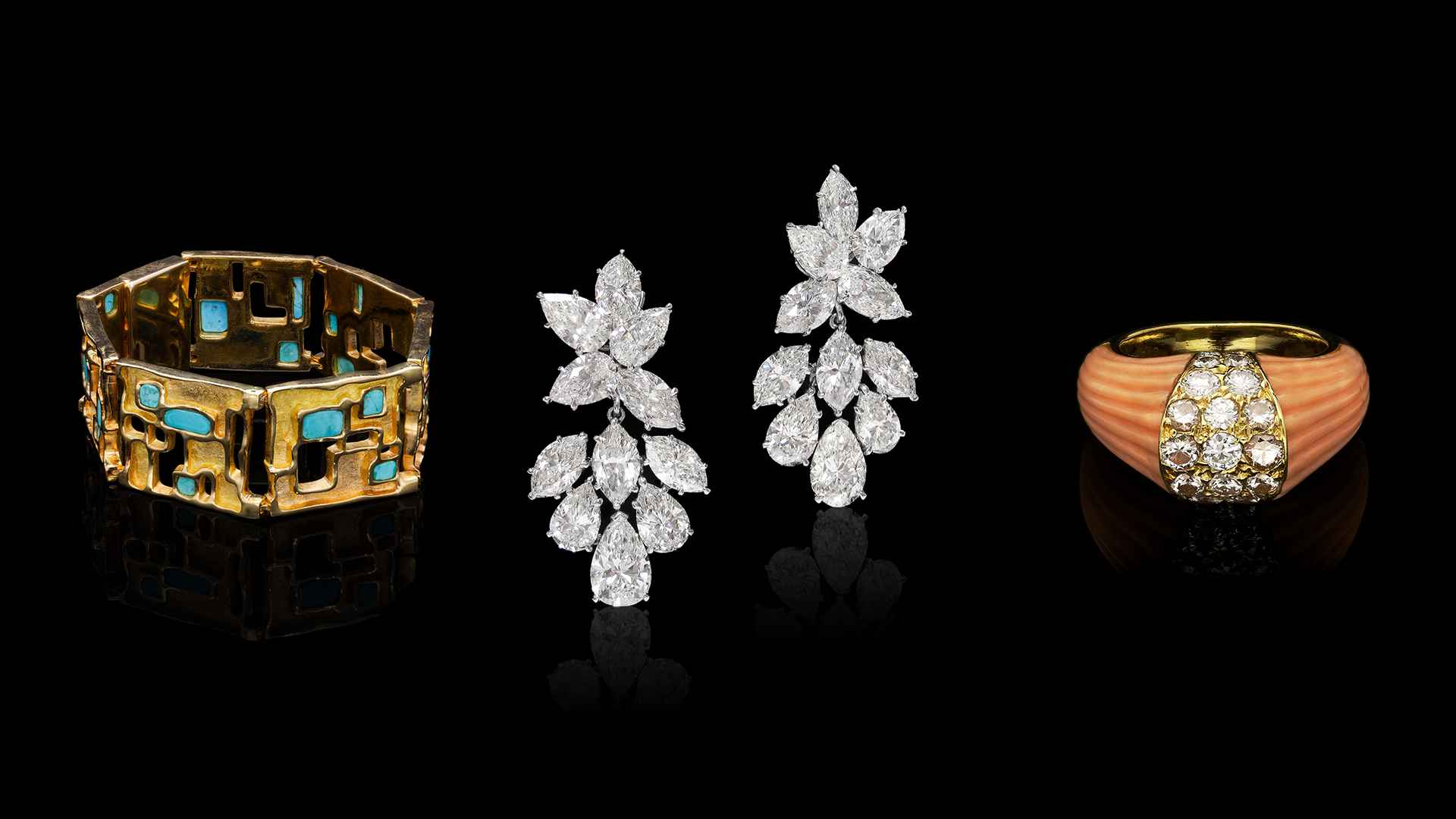 WHEN: 1960 to 1969. At the start of the 1960s John F. Kennedy had just been elected President, the look of the time was put together and ladylike with gloves, pillbox hats and a prim strand of pearls accessorizing a simple sheath dress or suit. By the end of the 1960s, hippies were taking to the streets to protest the Vietnam war. Bright colors, bold color blocking, miniskirts and go-go boots were of the moment and the bohemian look began to take hold as styles became more casual and free from the strict rules of earlier decades.

THE LOOK: Textured yellow gold with bold color combinations, abstract, large-scale, chic and playful. Starbursts, sunbursts and other “space” themes. Cluster rings were popular with a large stone resting on top of a cluster of stones – often diamonds. Ballerina settings were also a favorite with a large center stone surrounded by diamonds — frequently baguettes — that appear to float like a dancer’s tutu, around the central gem.

The 1960s were a time of unprecedented change. The U.S. and Russia were competing to see who could land on the moon first, civil rights were in the spotlight and the British Invasion saw rock ‘n roll rise to the top of the charts as the Beatles took over the world. And jewelry design reflected the times. The more formal matchy-matchy ladylike sets of the previous decade were being replaced with bigger, bolder more colorful jewelry that reflected a changing world that was more casual and incorporated influences from foreign lands. Unlike previous eras where there was jewelry that was for day and jewelry that was for night, the 1960s had more of an anything goes attitude and it became acceptable to wear any type of jewelry at any time.

Hollywood also put jewelry in the spotlight. In 1961, the movie Breakfast at Tiffany’s was released. The iconic Fifth Avenue jeweler played its own part in the film and its star Audrey Hepburn wore the Tiffany Diamond on her press tour for the movie. Elizabeth Taylor and Richard Burton made headlines with their shopping sprees at Bulgari and other jewelry purchases. Harry Winston made its own press by loaning jewelry to movie stars for various events. These celebrity connections put jewelry front and center in the minds of consumers.

The diamond-centric look of the previous decade began to see color take centerstage. Like the changing times, 1960s jewelry saw a shift away from traditional faceted gemstones set in platinum or white gold and a movement to textured yellow gold set with colored gemstones. Cabochon cut colored gemstones became a popular choice in the 1960s, they had a “new, modern” feeling to them and they changed the look of a design. The smoothness of the cabochons provided a distinct contrast to the textured metals that embraced the stone. The combination of textured yellow gold and cabochon gemstones was a chic evolution in jewelry style. It fit the more casual dress code that was coming into play during that decade. It also put hardstones such as lapis lazuli and malachite — which are perfectly complemented by yellow gold — front and center. Oversized rings, bracelets and necklaces began to emerge.

Brooches were still in demand during the early 1960s but they were generally smaller than in previous eras. Birds, animals, flora and fauna as well as abstract shapes were all interpreted in a more playful manner. David Webb created many of his bejeweled creatures — frequently in the form of brooches — during the 1960s, which were wildly popular and are highly collectible.

By the end of the 1960s the Vietnam war was raging, psychedelia was everywhere and it was the “dawning of the age of Aquarius”.