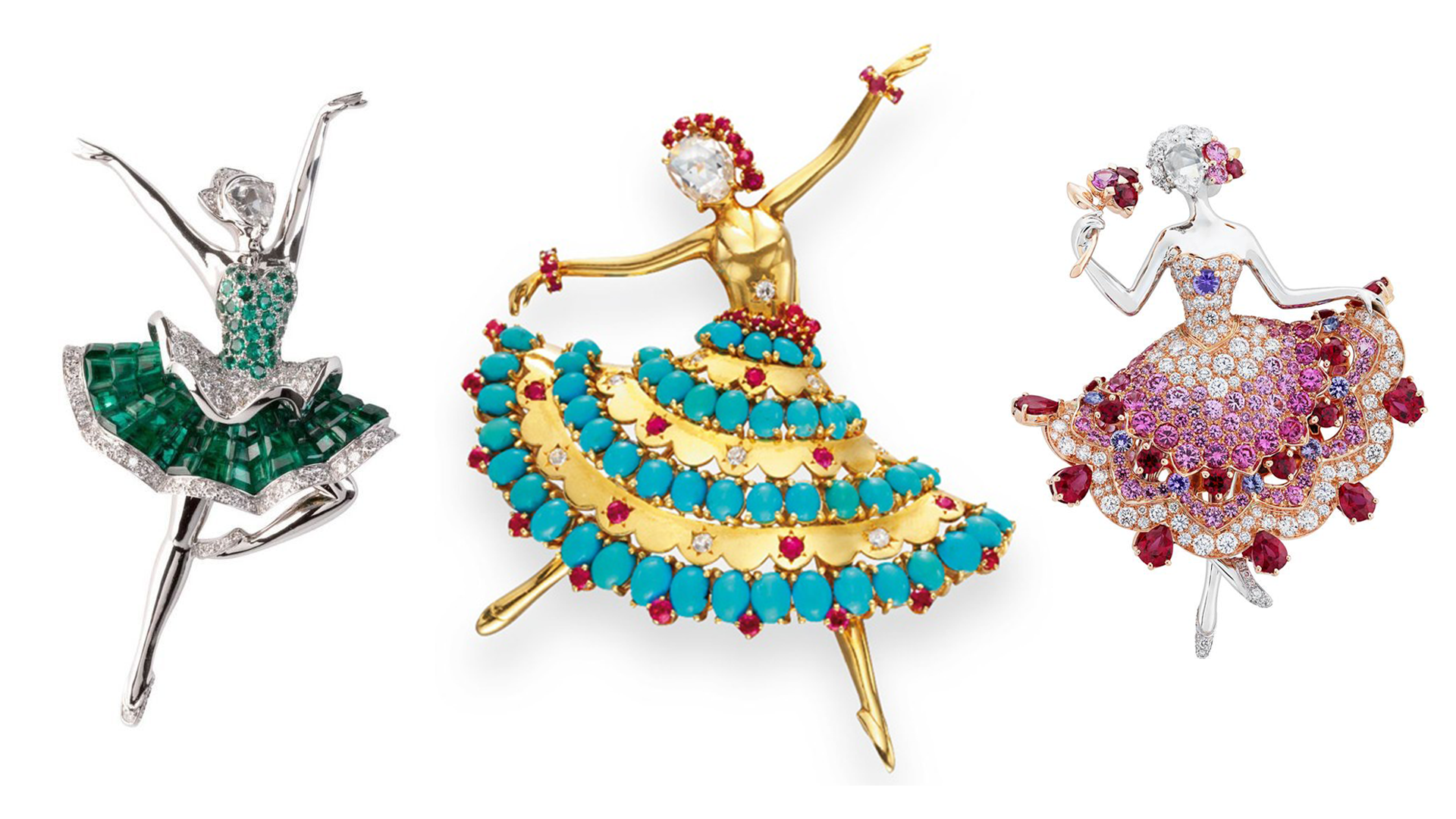 It was Paris, 1895 and love was in the air. That’s the year that Estelle Arpels married Alfred Van Cleef and it was a marriage that created a jewelry dynasty. Both came from families in the jewelry business — Estelle’s father was a gem dealer and Alfred’s father was a lapidary. It comes as no surprise that in 1906 the Maison of Van Cleef & Arpels was launched in Paris across the street from the Ritz Hotel at 22 Place Vendome, where it still remains. The couple partnered with Estelle’s brother Charles and were later joined in the firm by her two other brothers Julien and Louis. The firm remained a family affair until it became fully owned by Swiss luxury group Richemont in 2003.

Over the years Van Cleef & Arpels (VCA) has been one of the most innovative and prolific jewelry design houses. One of the first artistic directors of the firm was Renée Puissant, the daughter of Alfred and Estelle, who held the position from 1926 through 1942. She and designer René-Sim Lacaze teamed up and created a style and visual direction for the company.

During the Art Deco era of the 1920s and 1930s VCA created sumptuous jewels in platinum and diamonds characterized by the era’s geometric forms. The firm was heavily influenced by the discovery of King Tutankhamun’s tomb in 1922 as well as Japanese, Chinese and Indian motifs. In 1925 VCA was awarded the grand prize at the Paris Exposition Internationale des Arts Deoratifs et Industriels Modernes for its Roses bracelet comprised of diamonds, rubies and emeralds.

Perhaps one of the best-known creations of that time was the minaudiere — a bejeweled vanity case. The idea to create the cases came about when Florence Gould, wife of railroad tycoon Jay Gould was running late for an appointment with Charles Arpels and tossed all of her essentials into a small metal box and ran out the door. When Charles Arpels saw what she had done, it sparked the idea to create a much more glamourous way to tote those necessities around and the minaudiere — which had compartments for lipstick, powder, cigarettes, lighter and money — was launched into the world.

One of the most famous signature styles for Van Cleef & Arpels is the Mystery Set, which is a way of setting stones so that no metal is seen. The stones, usually sapphires or rubies, which are square with a groove on the bottom — must be cut very precisely to slide into a “rail” that holds the stones in place so that the metal is completely hidden.

A masterpiece of jewelry engineering, the Mystery Set, is a very exacting process that requires each stone to be specially cut. It also entails tremendous skill, time and patience on the part of the setter to make sure that the gems don’t break while they are being placed. The technique was patented by VCA in 1933 and the iconic setting is still being made today.

The Zipper necklace, another amazing feat of jewelry engineering, was first designed in the 1930s and was finally perfected in the 1950s. As the name implies, the design replicates a zipper that you would find on any piece of clothing, but glams it up with precious metals and jewels. The working zipper, does double duty — unzipped it’s a striking necklace, zipped it’s a chic bracelet.

Van Cleef & Arpels has created a fanciful bejeweled world filled with ballerinas and fairies. The first fairy clip debuted in 1941 as a symbol of hope. The Ballerina Brooches came out around the same time and are perhaps one of VCA’s most renowned jewels. They were inspired by Louis Arpels’ love of ballet. The ballerinas frequently have a rose-cut diamond face and each one gracefully depicts a dancers pose, while wearing a costume of precious jewels. The vintage ballerinas are quite rare and are highly prized by collectors.

The Ballerina Brooches were also the inspiration behind the New York City Ballet’s “Jewels”, a three-part work, each dance is named for a precious gem — Emeralds, Rubies and Diamonds. The idea came about when Claude Arpels met New York City Ballet co-founder and artistic director Georges Balanchine in 1965. Balanchine was so taken with the Ballerina Brooches that he choreographed “Jewels”, which is still performed by the company.

Another iconic design from VCA is the Alhambra necklace. First launched in 1968, Alhambra, one of the firms best known and most popular designs, is a beautiful symbol of luck based on a four-leaf clover. According to the company, Jacque Arpels, who was the nephew of the Maison’s founders, would pick four leaf clovers in his back yard and give them to his staff for good luck. Created with various gemstones, the style remains a jewelry wardrobe must-have for daytime wear and casual evenings out.

Throughout its history, Van Cleef & Arpels has been on the forefront of design appealing to celebrities and royalty including Grace Kelly, Barbara Hutton, Empress Farah Pahlavi of Iran, Wallis Simpson and many others. Today the firm continues its heritage of creating innovative jewelry designs to appeal to new generations.