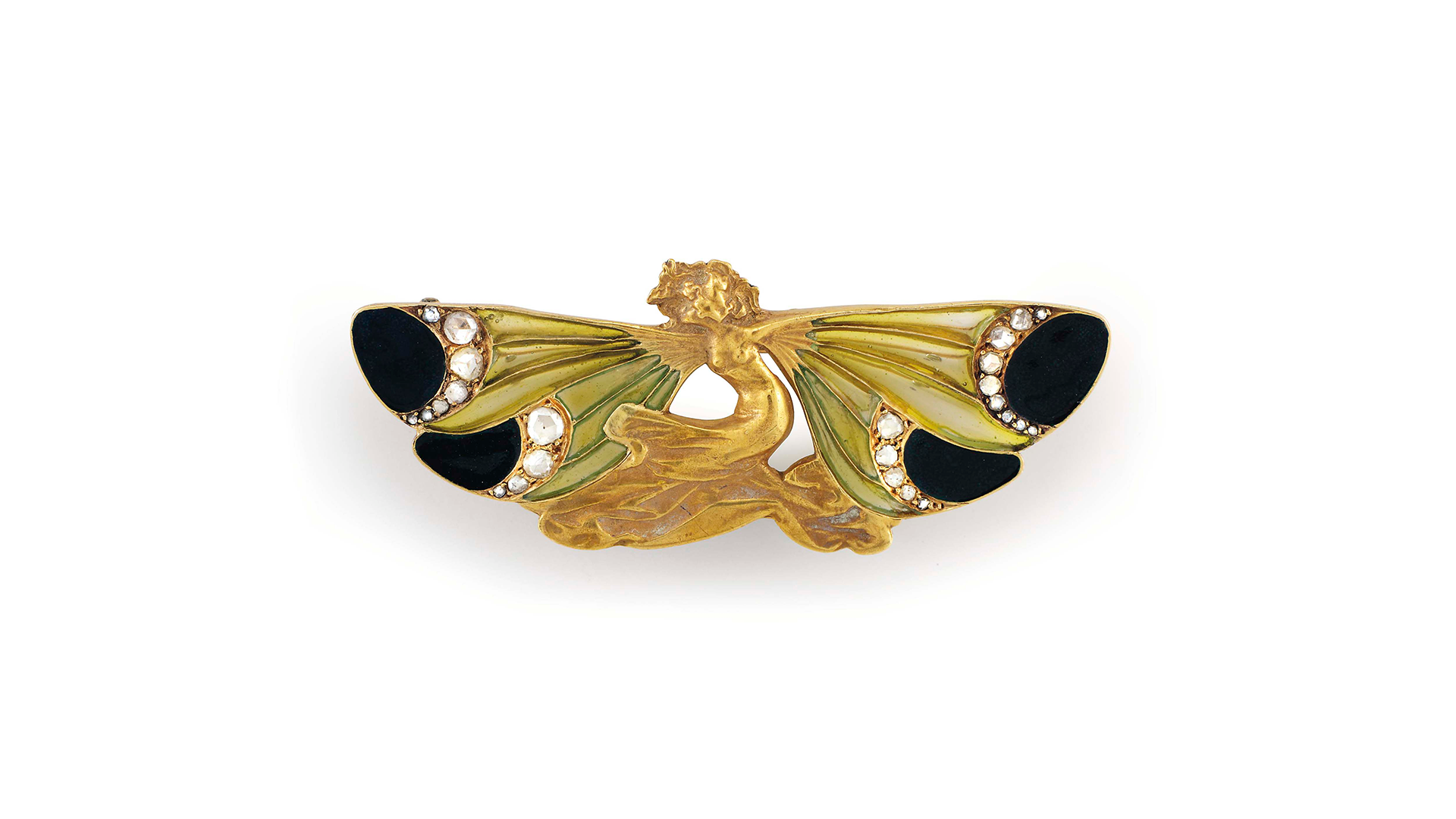 WHEN: Jewelry historians have slightly different dates for the Art Nouveau jewelry movement. It is widely accepted that it began in France and Belgium during the late 1800’s around 1895, although some historians put that date a bit earlier at 1890. The movement ended with the start of World War I in 1915, or even slightly earlier according to some historians. While the movement was decidedly French, it did have a following in Avant Garde circles elsewhere in Europe and America.

The Art Nouveau movement started in France beginning around 1890 to 1895 and it encompassed the decorative arts as well as jewelry. Generally when we talk about a style of jewelry it is associated with a time frame often involving reigning monarchs or a particular decade. Art Nouveau jewelry was a bit different. It was an artistic movement that started as a backlash to the machinated world of the Industrial Age. The artists involved in the movement made their pieces by hand with rapt attention to details portrayed in the imagery, believing that design was more important than materials used. The designs were influenced by the Arts & Crafts Movement in England, Japanese art and the Symbolist Movement that started in France but spread through Europe.

Most of the jewelry during the late 1800’s and early 1900’s was very formal and gem intensive. It was a time of great wealth and people wanted to show it through the jewelry they wore, so the value of the pieces was in the gems. But the Art Nouveau movement was the opposite, since it was about design over materials, to some degree it redefined precious by incorporating materials such as bone, horn or even glass into the designs. It was a rebellion against the practice of jewelry only being valued for the gems. That being said, diamonds and other gemstones were used to define elements of a design, but they were generally not the central focus.

Plique-à-Jour, French for letting in daylight, is a transparent enamel that requires a high level of skill to create. The enamel is placed into the openings of filigree metalwork, but there is no metal behind the enamel. The finished effect is often compared to stained glass due to the enamel’s transparency. Guilloche enamel work is created very differently, but also has tremendous artistic merit. Guilloche is a type of metal work that engraves an intricate, repetitive pattern into a metal which is then “painted” with a thin layer of enamel so that the pattern remains visible. Both enameling techniques allowed for large areas of pastel color on a piece. Enamel is rather fragile and consequently many pieces of Art Nouveau jewelry have not survived because they broke or were damaged.

From a design perspective Art Nouveau focused heavily on the feminine form. The curves of the female body were emphasized as was long flowing wavy hair. Women were often depicted as being almost holy, or as a sensual seductress, perhaps even slightly sinister or dangerous – these two archetypes were a reflection of the changing role of women in society at that time. Women were actively seeking the right to vote and they were looking for opportunities outside the home, both of which threatened to upend the status quo. Nymphs, fairies and mermaids, either nude, or partially covered by their hair, frolic on Art Nouveau jewels, scandalizing, the prim and proper aristocratic, wealthy society mavens who found this style of jewelry too risqué to wear.   Instead it was worn by those who were free thinkers,  artists themselves or bohemians, which in that era meant supporters of the arts. Actress Sarah Bernhardt, for example, was known to favor Art Nouveau jewelry.

Nature, in the form of vines, exotic florals and leaves were another very important theme in Art Nouveau jewelry. Dragonflies, butterflies and other insects often with splendid plique-à-Jour wings were also prevalent. These naturalistic themes were again a backlash to the industrial age as people moved from rural areas to cities to find work. The jewelry was a reminder of nature’s beauty and a message to stay connected to its nurturing presence.

The Art Nouveau movement was short-lived, but impactful. It brought attention to jewelry design as an art form, but like everything else in that time period, it abruptly ended with the start of World War I.