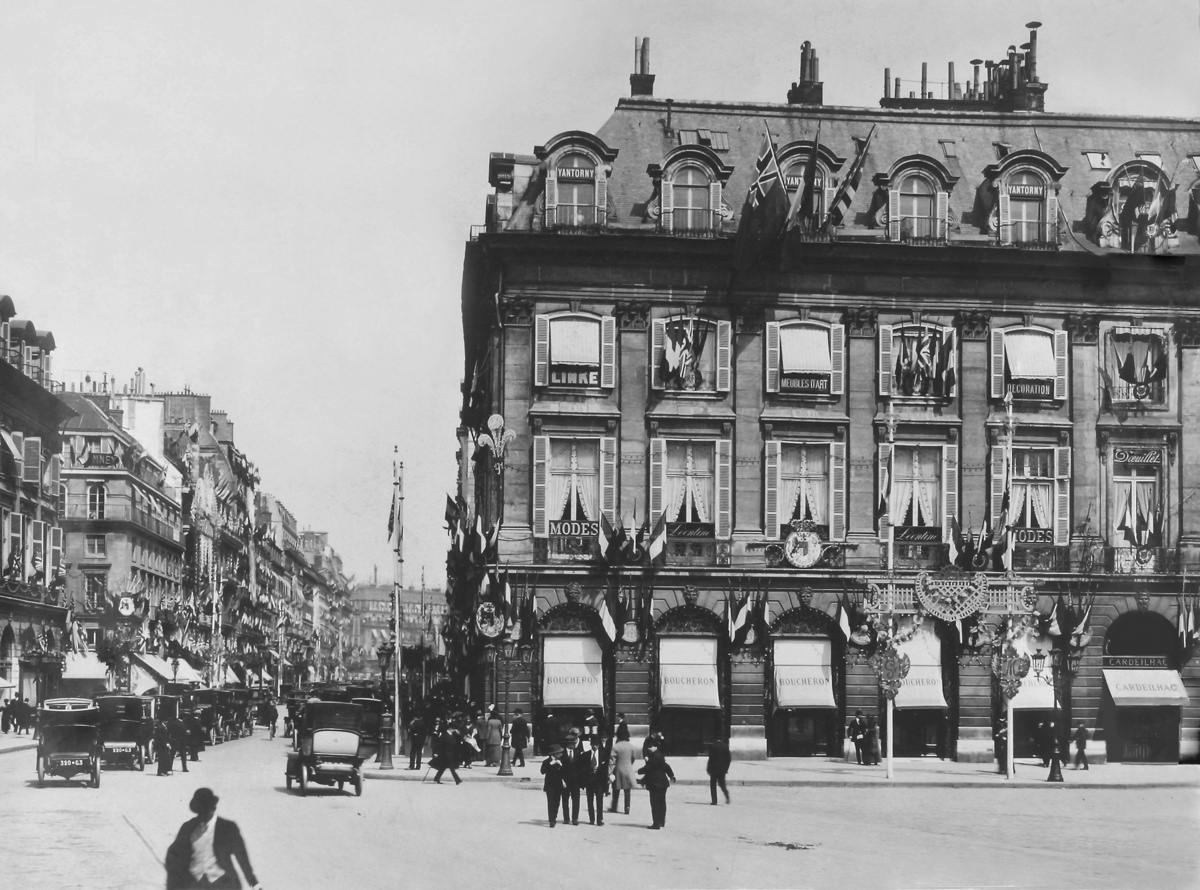 If you do not know where is the Hotel de Nocé, its address, however, will tell you everything about it. Elegantly built at 26 Place Vendôme, it is the dazzling place of Maison Boucheron. Recently totally reopened, it took two years of work to restore all its beauty. An impressive project that required major works on the structure and presence of the Chief Architect of Historical Monuments : Mr. Michel Goutal. We met him to better understand the stakes of this restoration.

1 — The Nocé Hotel, a turbulent history

Initially, the Hotel was built in 1717 for Charles de Nocé who gives it his name. Born in 1662 and died in 1739, he is best known for being Master of the Garde Robe and First Gentleman of Duke Philippe D’Orléans. The hotel will be sold first in 1720, then in 1722 and finally in 1760 when Jean Cottin, Director of the East India Company bought it. The anecdote is funny when we know the future links that will unite the Boucheron House to Indian Maharajas. It will also be owned by Gaspard Moïse de Fontanieu, one of the promoters of Place Vendôme. In 1782, it is the receiver of the finances of Châlons who buys it : Mr. Jean-Baptiste-François Gigot d’Orcy. The man is known to be passionate about entomology and mineralogy. He had a fabulous and famous cabinet of curiosity and he participated in the publication of books through his role as sponsor. He even gave his name to the hotel that is sometimes found as the Hotel d’Orcy. In 1801, the places fall into the patrimony of the notary Marc Colin. Then in 1814, he was sold to the framer and gilder Marc-Antoine Chaise. It will then become a simple building and will have some famous inhabitants such as the Marquis de la Baume, the cabinet maker François Linke, the boot maker Yantorny deemed « to be the most expensive of the world » and even Lucien Guitry, the father of Sacha.

Among the famous tenants of the Hotel, there is the presence of the Countess of Castiglione also known as Virginia Oldoini. Described as « the most beautiful woman of her century » but unable to grow old, she landed the last years of her life in her little apartment on 26 place Vendôme where she had covered both the windows and the mirrors. The goal ? She didn’t want to see her reflection. Leaving only at night, she wanders around the Vendôme square and will leave the place in 1894. Frédéric Boucheron moved in 1893 and he chose this place for its maximum sunlight that illuminates the jewels of the house visible in the shop windows cases. He is the first jeweler to choose the Place Vendôme and inaugurates the jeweler tradition of the district.

In 2016, the Kering Group (formerly PPR) becomes the full owner. In the aftermath, the Boucheron boutique closes its doors, the facade is covered with a gigantic tree, the in-house workshop moves on Rue de la Paix. Work can begin.

The restoration of the Hotel de Nocé was intended to restore its original configuration. But this was not necessarily simple because the oldest description dates from 1760 and the building has already been largely modified. We know that at that time it had an extension housing several stables and a large main building surrounding the inner courtyard. The ground floor and mezzanine were used at the time by the kitchens and outbuildings. The first floor hosted a large apartment, an antechamber, two bedrooms and the library. The second floor, already with mezzanine, had a similar configuration. Adding a major constraint, the building is listed as a Historic Monument since 1930. It was necessary to detail 300 years of successive developments to find the initial volumes and understand how they had been modified over the centuries. That’s here Michel Goutal and his team began their mission.

But before to enter in the Hotel de Nocé, a point on the facade is necessary. Do you know that due to the PLU (local urban masterplan) the facades of the Boucheron boutique are protected and as such difficult quite impossible to change. This means that if the shop would one day leave this place, the external elements of the house could not move except authorization of the ABF (Architect of Buildings of France).

It is now time to enter in this wonderful place. Now try to imagine what a private mansion can look like transformed into a building after the French Revolution … It must be remembered that at that time, the goal is to house people. So we partition and put down mezzanines wherever possible. This creates extremely low ceilings appartment or storage. No more ceilings at 5.20m, the lowest are barely 2.10m. In the same way, the staircase of the hotel will be largely modified in its high part. It is reduced to increase the living space of certain levels it serves. Also, the purpose of the renovation was clear enough, it was necessary working to find the spirit of the 1893 store while finding at the maximum volumes of origin of the construction. Most of the work was to remove the additional volumes laid in the 1980s. Between the removal of mezzanines, false ceilings, various partitions, it is almost 200m² that were removed to the structure.

The restoration of this place allowed to restore some remaining elements of the construction. Although they were very few, there were still a few window frames but also the floors and the honor staircase. By renovating 26 Place Vendôme, Boucheron wanted to recreate a family home. The only thing missing would be the cat purring by the fire, reminding us that for several years, Wladimir, Gerard Boucheron’s own cat was here at home.

This restructuring necessitated the presence of specialized companies, often with rare know-how and significant experience in so-called « historic » sites. For example, the Atelier Del Boca for ceilings and plasters, the Atelier Mériguet-Carrère for the restoration of paintings in the Chinese salon, the family company Delisle for luminaries and chandeliers, and Béatrice Racine – restorer of wallpapers – who intervened for the restoration of the eighteenth century Chinese wallpapers rediscovered in the library of the apartment.

On arrival, the result is quite impressive and places have regained their majesty. The gilding brings an incredible brilliance to the different salons and the woodwork has found their natural colors. Finally, the renovation brought in the external light by removing unnecessary surfaces. The store and the different levels radiate again, which certainly would not have displeased to Frédéric Boucheron.

3 — A night in the heart of Place Vendôme

With the creation of the second floor apartment, the Boucheron House inaugurates a new customer experience in the jewelry industry and offers to its best customers the opportunity to enjoy a privileged stay in the boutique. In partnership with the Ritz Paris, this is an intimate and luxurious hotel experience that is offered. If the restoration is particularly successful, the contemporary decoration wanted by the decorator Pierre-Yves Rochon is absolutely gorgeous with extremely sharp choices : a table by Franck Chartrain, a work of the feather artist Émilie Moutard -Martin, a Noah Duchaufour-Lawrence sofa or the Pierre Frey wallpapers.

Everything here reminds us that luxury is above all a fragile mixture of rarity and know-how. But above all it can be beautiful without being noisy, that it can be inspiring without doing too much. Also, we hope you will have the chance to discover this place because it really deserves to linger. So, dare to push the doors of the 26 place Vendôme store because the new shop is a place to know, now, absolutely!