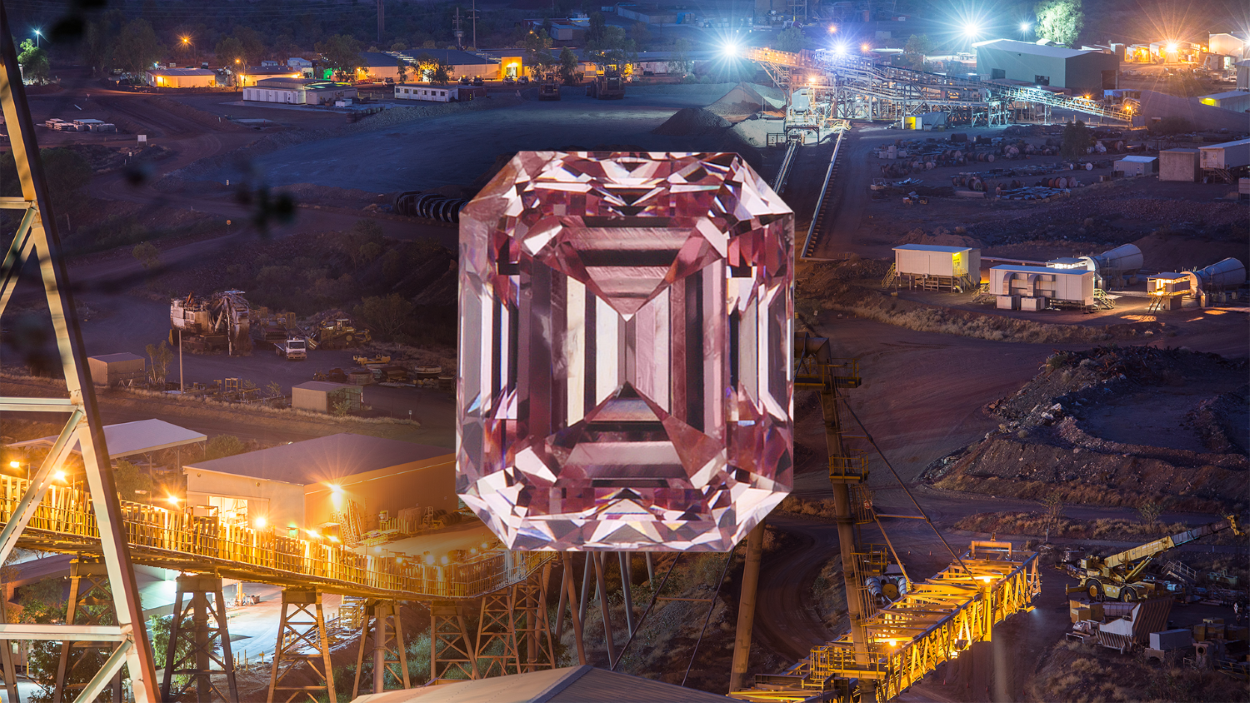 Deep in the wilderness, in the east Kimberley region of Western Australia, the Aboriginal people pass down their history through oral storytelling. One of the stories, Barramundi Dreaming, is a mystical tale of how pink diamonds from the Argyle Diamond Mine got their color. According to folklore, three women were casting nets in the water to catch fish. In an effort to escape the nets, a barramundi fish jumped in the air and flew over the nets. In the process the fish dropped its scales in the water and on the rocks, which the legend says, turned into pink diamonds.

The Argyle diamond mine sits on land that belongs to the Miriuwong, Gidja, Malgnin and Wularr people who are the traditional custodians of this remote area. Diamonds were discovered in the region in 1979 and mining company Rio Tinto began operations at the Argyle Mine in 1983, leasing the land from its owners. The Argyle Pink Diamond Facility is located in Perth, Australia.

During its 37-year lifespan, the mine produced some 865 million carats of rough diamonds. Most of the gems were lower quality brown or industrial diamonds. Then something unexpected and magical happened: Pink diamonds were discovered during production and through its lifespan the mine produced a steady supply of these gems in an extremely limited quantity. About one tenth of one percent of all of the diamonds found in the mine, were pink. Rarer still were red diamonds and even more rare – violet diamonds.

To put that in perspective, each year only about 50 to 60 pink diamonds were found in sizes above a half carat. Pink diamonds from the Argyle mine tend to range in size from 1 to 2-carats, with the very occasional gem reaching 3-carats. According to the miner, the gems are so rare that an entire year’s production of pink diamonds 1-carat and over would fit in the palm of your hand and it would take 15 years to collect enough pink diamonds to fill a champagne flute. Despite these strikingly small numbers, the Argyle mine produced 90 to 95 percent of the world’s pink diamonds. The remainder are found sporadically in Africa, Brazil and India.

One of the attributes that sets Argyle pink diamonds apart from other pinks is their vibrant color. While they may be small, they have a powerful pop of color that ranges from soft powder puff pinks to vibrant fuchsias and magentas. According to the Gemological Institute of America (GIA), pink diamonds get their color from a distortion in the crystal structure of the gem as it is forming possibly due to the intense heat and pressure of being forced to the earth’s surface. The shift in the crystal structure causes the diamond to reflect light differently resulting in the pink colors that we see.

The rough stones were cut in the Argyle Perth facility by highly-skilled master cutters who carefully cajoled the best color and most sparkle out of each gem. The internal structure of pink diamonds makes them more challenging to cut and the artisans who worked on those stones had to be patient. Due to their internal structure it takes about four times longer to cut one of these precious pinks than it does a white diamond. From the time the diamond is found until the polishing is finished takes over a year.

Once the diamonds were ready to sell, the stones were collected into a tender that travelled to major cities in the world to be viewed by about 150 dealers, retailers and collectors at invitation only events. The stones were sold by sealed bid and Rio Tinto never revealed the prices paid. What we do know is that pink diamonds can easily sell for $1 million to $2 million per carat and we could see prices take a leap in the next few years. In November 2020, the Argyle mine ceased production and with its closure the world has lost its one source that provided a steady supply of pink diamonds.

Rio Tinto has helped its Argyle employees make career transitions and it is working with the Traditional Owners and local stakeholders to dismantle the mine and rehabilitate the land, a process that is expected to take about five years. Once it is complete the land will be returned to the Traditional Owners as the custodians of Country to use for cattle grazing, tourism, cultural use and possibly small-scale agriculture.