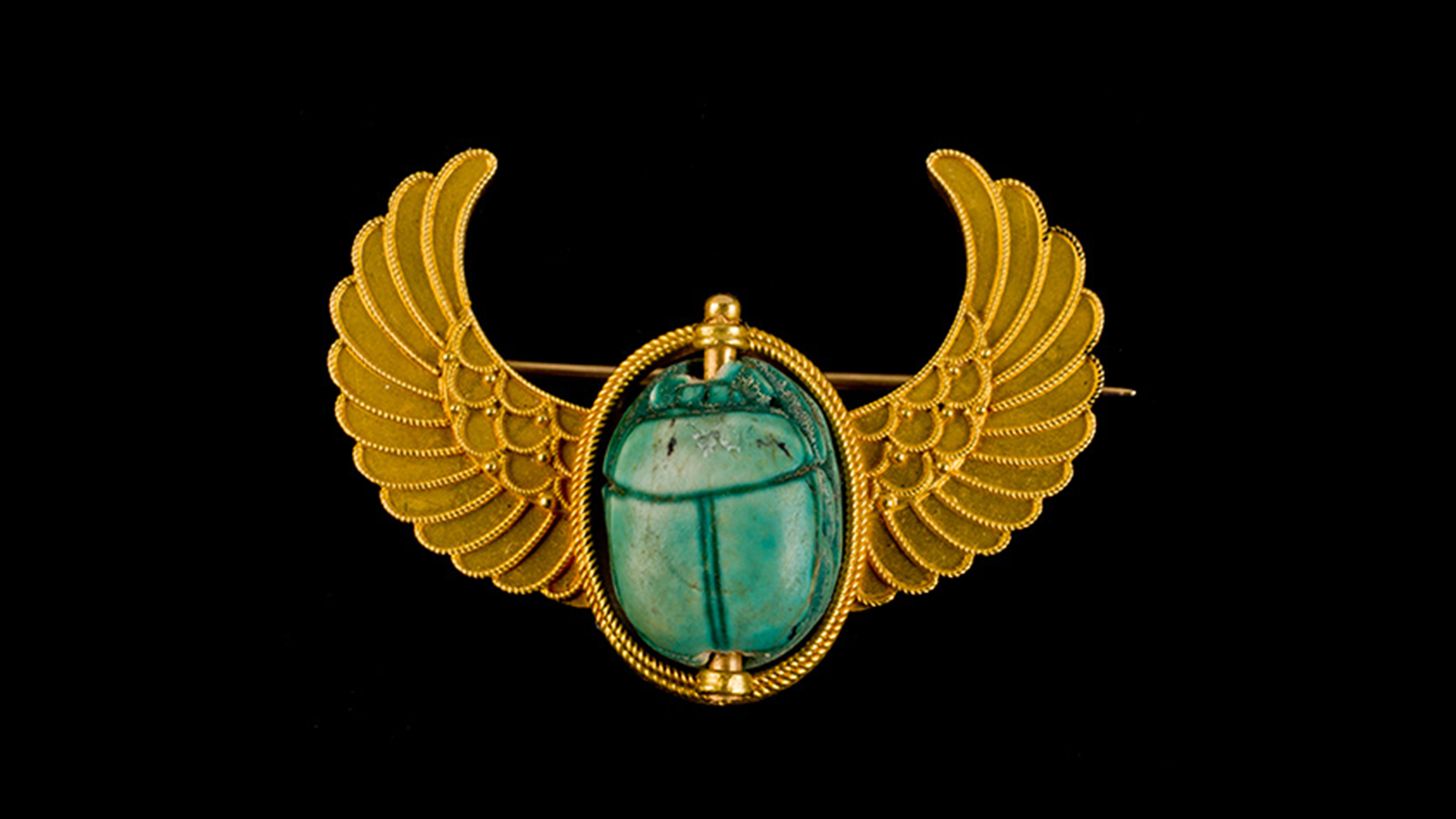 Magical and mystical, ancient Egypt has intrigued and inspired jewelry designers throughout history. November 2022 marks one hundred years since Howard Carter discovered King Tutankhamun’s tomb in Egypt. To coincide with this momentous event, the Worcester Art Museum (WAM) presents a new exhibition — “Jewels of the Nile: Ancient Egyptian Treasures from the Worcester Art Museum” on display through January 29, 2023.

The foundation of the exhibition is the extraordinary assemblage of ancient Egyptian jewelry from Kingsmill Marrs and Laura Norcross Marrs. This collection was gifted to WAM (located in Worcester, Massachusetts) in 1925 – 1926 by Mrs. Marrs. The couple was close friends with Howard Carter, who helped them acquire what is one of the foremost collections of Egyptian jewelry in the United States. The Marrs collection has over 300 pieces that will be on display for the first time, although part of the collection was briefly on display at the Michael C. Carlos Museum, Emory University. The collection is augmented with pieces from WAM’s permanent Egyptian collection, private loans, as well as seven objects on loan from Tiffany & Co.

The Marrs’ lived in a time when people traveled to Egypt and picked up antiquities during their trip. Some people had the pieces mounted in modern settings, others took them to a jeweler who made imitations of ancient Egyptian designs. “The Marrs’ were minimalists in their approach to design. The antiquity was the most important part for them,” says Yvonne Markowitz, the Rita J. Kaplan and Susan B. Kaplan Curator Emerita of Jewelry, Museum of Fine Arts, Boston, who is co-curator of the exhibition along with Peter Lacovara, Director of the Ancient Egyptian Archaeology and Heritage Fund. “They already knew Carter, who was British, before he discovered King Tutankhamun’s tomb.” Carter, who moved to Egypt when he was 18, initially made a living as a watercolor artist, documenting Egypt’s glorious past. Before long, he turned his attention to archeology, earning the respect of seasoned excavators.

Carter first met the Marrs’, who were from prominent Massachusetts families, in 1908 during one of their trips to the Middle East. At the time, Carter was painting watercolors of Egyptian tombs and temples. The couple purchased six of his watercolors over the next decade. In addition, he advised the Marrs on collecting Egyptian antiquities. “Howard Carter would take the Marrs’ to see dealers from whom they could buy pieces. In the WAM Archives, there are comments on these pieces as to their findspots along with clues as to how the pieces might have been worn,” notes Markowitz. “It is the extra information provided by Howard Carter and dealers that makes the Worcester Art Museum collection so important.”

Most of the Marrs Egyptian collection consists of necklaces, finger rings, bracelets, anklets, scarabs and amulets. An entire section of the exhibition is dedicated to amulets. In addition to jewelry, the pair also acquired stone and glass vessels, cosmetic equipment and funerary objects . The collection spans almost two thousand years from the Old Kingdom (circa 2543-2118 BCE) through the Roman Period (circa 30 BC – AD 395).

“The building blocks of Egyptian jewelry basically consists of beads and amulets,” says Markowitz. “In many ways, the jewelry worn in ancient Egypt has much in common with contemporary jewelry. For example, around 2000 BC (the Middle Kingdom), it was fashionable to wear ball-bead necklaces of one color—today you could browse the jewelry display at Macy’s and find something very similar.”

Beads and amulets were the most important jewelry forms worn in ancient Egypt and both categories had symbolic meanings unique to the culture. For example, “the Sacred Eye of Horus was a popular motif in ancient Egyptian jewelry,” comments Markowitz. “Its representation was symbolic of the falcon-god Horus, whose eye was injured in a battle. The eye self-healed and for the ancient owner, wearing the Eye of Horus placed you under the protective power of a mighty deity.  It’s similar to how a person would wear a cross, or St. Christopher medal today.”

Scarabs were another important amuletic form in the Nile Valley and “The Sacred Beetle” section of the exhibition explores their role in Egyptian culture. The ancients believed that scarabs — a species of the dung beetle — had magical powers. Jewelry with scarab motifs were abundant throughout the long course of dynastic history and were thought to bring renewed life and protection to both the living and dead. The power of scarab jewelry was often enhanced by the magical inscriptions, emblems and pictorial images that were added to their flat bases (undersides).

According to Markowitz, a lot of the jewelry making techniques, which are showcased in the sections on “Crafting Ancient Egyptian Jewelry: The Materials and Technologies,” are the same today as they were in the ancient world. “Typically, the ancient artisan hammered a clump of gold until it became flat and thin. The sheet metal would then be cut with a hardstone or metal blade and then hand-formed or pressed in a mold to achieve the desired shape. The various shapes would then be assembled and soldered to complete the ornament.  Many three-dimensional forms, especially funerary items, were hollow or filled with a resin to make the objects more durable. The ancients also used the lost wax casting method for creating solid objects although this technique was considered wasteful of precious metal,” Markowitz explains.

Gemstones were also used in jewelry, but not in the same way that we use them today. Markowitz notes that the ancient Egyptians never missed an opportunity to interpret the natural world in symbolism. This meant that not only was the imagery of a piece important, but so were the materials used in jewelry’s manufacture. Stones and colors were imbued with meaning. “Wearing gold invoked the power of the sun, which symbolized rebirth and resurrection,” comments Markowitz. “The green of amazonite reflected the regenerative power of nature and red was symbolic of the dynamic, life-giving properties of blood. Many amulets were often associated with a specific color. For example, representations of the goddess Isis were often made of reddish carnelian — that was her color.”

Another important material used in ancient Egyptian jewelry was faience, a man-made quartz-based ceramic. In antiquity faience was considered to have other-worldly, magical properties. “Faience may be molded by hand and glazed or self-glazed by the addition of an oxide pigment to the mixture. Surprisingly, an amazing amount has survived in good condition,” comments Markowitz.

The exhibition also features a section on “Re-imagining the Past: Egypt and its Revivals.” This section of the exhibition examines how various events in Egypt attracted the attention of the world. The making of the Suez Canal in 1860 and of course, the 20th century discovery of King Tutankhamun’s tomb contributed greatly to an interest in all things Egyptian. After the discovery of King Tut’s tomb, interest in everything Egyptian was so intense that the press came up with the term “Egyptomania” to describe the frenzy.

One of the most exciting sections of the exhibition is the Discovery Area at the end. In this area, visitors can virtually try on jewelry from the exhibition as well as smell the luxurious fragrances that the ancient Egyptians used to make their perfumes and cosmetics.

“The ancient Egyptians created ornaments of outstanding quality and timeless appeal,” concludes Markowitz  “With this exhibition, we are providing an opportunity for the modern viewer to enter into the lives of an ancient people through some of their most personal objects, and to witness their enduring impact on our understanding of beauty several millennia later.”