When it comes to rare and exquisite vintage jewelry, signed pieces can be among the most sought after and hard to come by jewels. Those highly coveted pieces of signed jewelry are very desirable to collectors as well as to people who want an assurance that they are getting top quality gems, impeccable fabrication and stellar design. The right signature on the right jewel can also add a premium to the price of the piece.

“Signatures can add tremendous value,” comments Miami-based Steven Neckman of the eponymous firm. “If it’s a recognized signature it shows the quality of a piece. When a jewel is signed Tiffany & Co., Cartier, or Van Cleef & Arpels, you know it is well made and that they use quality stones. Generally, with signed jewelry it’s a given that the quality is excellent with strong design.”

New York-based dealer, Richard Buonomo, principle of the firm bearing his name, agrees that a signed piece of jewelry carries a guarantee of quality, prestige and value, but he notes that there are some caveats to a signature’s worth. “A piece is more rare if it is signed, it is scarcity that drives prices up,” says Buonomo. “Still a signature does not always mean much. Some pieces are so generic or have so little design that it doesn’t change the price much.”

The Status of a Signature

Beyond the precious metals, fabulous gemstones and intrinsic design value, people also want signatures to elevate their own status. “People have a desire to be associated with something that lifts them up in society and enhances their status. It’s a basic human instinct,” observes Janet Levy of J. & S.S. DeYoung, in New York City. “A piece of jewelry with a signature denotes both quality and status.”

But what if two pieces are comparable, essentially the same in terms of quality and styling, yet one is unsigned. How do you decide which piece to purchase? According to Neckman, a signed piece of jewelry is more marketable, but that can also vary depending upon how hot a name is in the current market, something which changes over time.

Certain signatures are always top of the list for those seeking signed pieces – Cartier, Van Cleef & Arpels, Tiffany & Co. and Harry Winston. But Levy has noticed that over the past ten or 15-years name recognition has increased for many other design firms and that has opened up the market significantly. “There is a much wider appreciation of special designers — Sterlé, Mellerio, Boivin. There were a lot of very refined French design houses and a circle of designers who were more art houses. That world has opened up a lot because people have found out about them online. Now people know names that they didn’t know 20-years ago.”

According to Levy, the market for signed jewelry can be divided into two areas — modern and vintage. “If there is a quality signed vintage piece it will be more valuable because these pieces are no longer made and they are very collectable. There are more collectors now, so those pieces are harder to find and more valuable,” explains Levy. “With modern pieces the signature is tied to market demand or quality. The pieces are not as rare because they are in production. The value is influenced by how available and how much demand there is for a particular name.”

Neckman considers signed jewelry to be collectable art and notes that some artists are more valuable than others and cites Van Cleef & Arpels, Bulagri and Cartier as three current top sellers.

“It’s not just a signature that adds value,” concludes Buonomo. “Some pieces of  jewelry are imbued with a certain character of design that is associated with that name. The jewelry will have all the characteristics of design, quality of materials and manufacturing. That’s when you have a perfect storm for everything to add value to the piece and that’s when you can charge more for the jewel.” 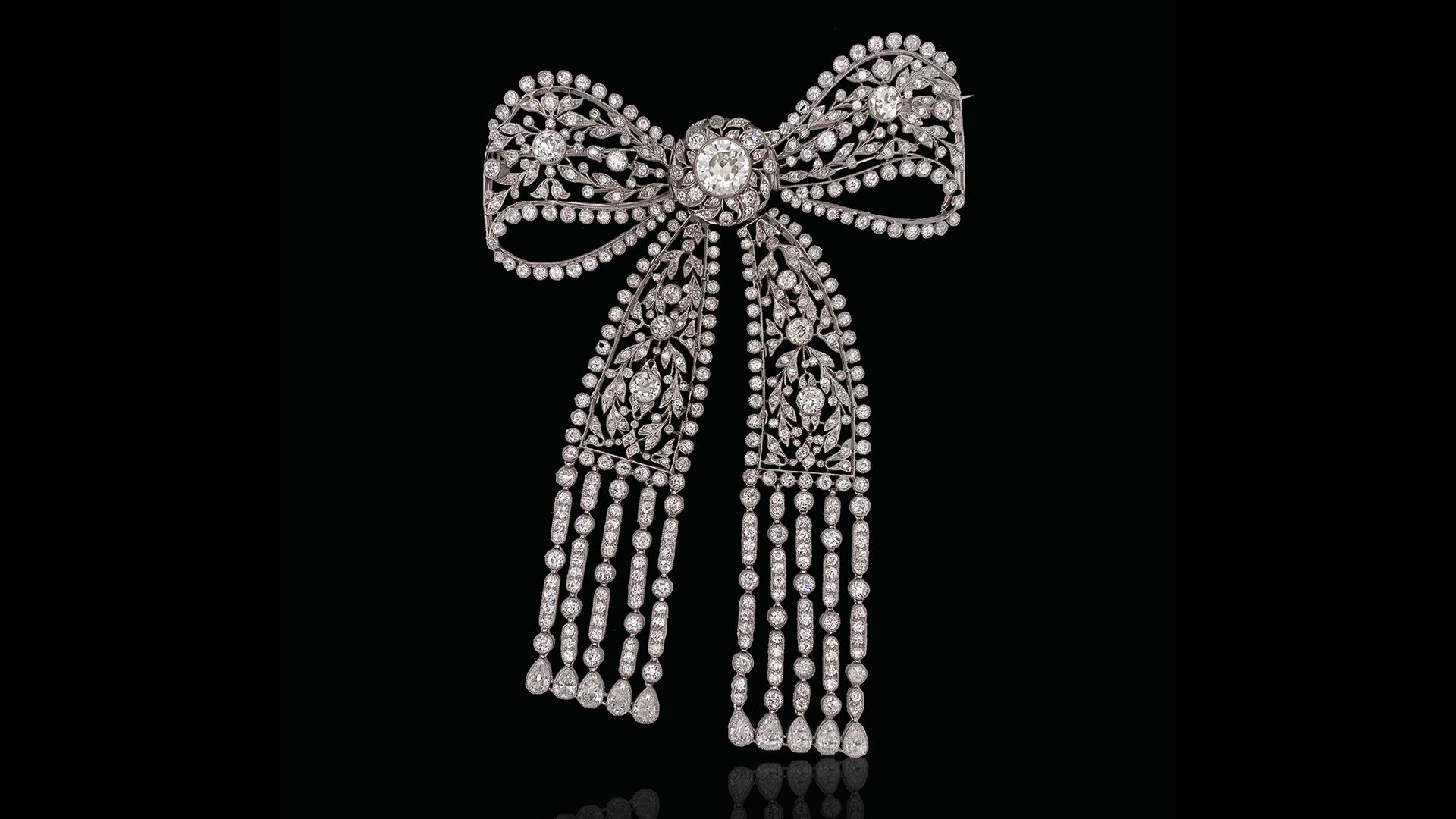 WHEN: 1901-1915, the Edwardian era officially began during the reign of King Edward VII in 1901 (although he was coronated in 1902) and ended with the start of World War I in 1914/1915, historians vary as to the exact dates. Edward, the son of Queen Victoria, began to take on many official duties after Prince Albert, the Queen’s husband and Edward’s father, died. The Edwardian style began to develop in the late 1800s and blossomed during his reign. Even though this same time period was known as the Belle Epoque in other parts of Europe and as the Gilded Age in the United States, the jewelry had the same design aesthetic.

THE LOOK: White-on-white platinum with pearls and/or diamonds, light and lacy, intricate, formal and regal

King Edward was known for his love of luxury and revelry. There were many parties and celebrations during his reign and dressing up was required. Not just dressing up to look good, but dressing up to show your rank in society and your respect for the rank of those around you.

Status-conscious Edwardians were not shy about piling on jewelry. If you want to see layering at its best, look at women of the Edwardian era. They started with a choker or dog collar and then added more necklaces of varying lengths that dropped to the waist, or longer. The dog collar was particularly popular as Edward’s wife Queen Alexandra favored the style to hide a scar on her neck and others followed suit.

Brooches and pins were also popular, with fashionable Edwardians wearing numerous pins during the day on their bodice, as epaulets and in their hair. It was also customary to wear a few bracelets stacked together on each arm along with several rings.

For an evening event, along with all the other jewelry, tiara’s, jeweled combs or other hair ornaments were worn. Tiara’s were especially important if royalty (king, queen, prince or princess), or upper echelon nobility was present. And for evening, bigger brooches were worn, often a few at a time, with star motifs being favored.

There were a number of technological events in the Edwardian era and two that made a big impact on jewelry and fashion. In 1903, the high heat oxyacetylene torch was invented. The torch was able to easily heat platinum to its melting point, allowing jewelers to stretch the metal until it became very thin. Platinum, which is a very strong metal was then formed into delicate, but very elaborate settings. It was also pierced to create openwork adding to the lightness of the pieces both aesthetically and in terms of weight. Jewelry created in the Edwardian era is surprisingly light weight given its larger sizes.

A second major technical advancement was availability of electricity. It made a big change in fashion. Heavy fabrics, brocades and velvets in dark colors that were beautiful by candlelight looked dreary and drab under electric lights. They were replaced by pastel colors and lighter fabrics such as silk or taffeta. These new styles were the perfect backdrop for the intricate, openwork jewelry of the era.

Diamonds and pearls were two of the most used gems in Edwardian jewelry. Set in platinum they reinforced the era’s formal white-on-white design aesthetic. The diamond mines in South Africa were producing an abundant supply of diamonds making them readily available and cost effective to use in jewelry design.

Pearls on the other hand were much more rare as cultured pearls had not yet been perfected and brought to market. Pearls were natural and much harder to come by making them scarce and far more valuable than other gems.

When World War I erupted, the gracious and luxurious lifestyle of the Edwardian era came to an abrupt end.

The glamour and elegance of bygone eras is captured forever in precious gemstones and metals that were beautifully crafted and the height of fashionable jewelry when they first debuted. Fast forward to today and vintage jewelry is more desirable than ever, speaking to the contemporary jewelry aficionado in much the same way that it did to the original owners of these pieces.

Every piece of estate jewelry has a story to tell. Whether it is the story of the previous owner, a bit of history about the maker, or the style of the times, the story continues and grows as the next person makes the jewel a part of their life.